Since our approach on art is heavily influenced by the aesthetic category of sublime, it is worth posting a short article that will hopefully help others to become familiarised with this concept and expand their creativity.

Known since the 1st century AD, the term ‘sublime’ was rediscovered in the 16th century and became a familiar subject in British and German philosophy. It signifies an aesthetic emotion of awe when confronted with greatness beyond comprehension, and was first used to describe natural landscapes.

Edmund Burke’s essay ‘A Philosophical Enquiry into the Origin of Our Ideas of the Sublime and Beautiful’ (1757) was an essential contribution to the development of the notion. Burke understood sublime as a physiologically response to terrifying phenomena (Alison Smith, ‘The Sublime in Crisis – Landscape Painting after Turner’), calling it an instinct of self-preservation:

“Whatever is fitted in any sort to excite the idea of pain, and danger, that is to say, whatever is in any sort terrible, or is conversant about terrible objects, or operates in a manner analogous to terror, is a source of the sublime; that is, it is productive of the strongest emotion which the mind is capable of feeling … When danger or pain press too nearly, they are incapable of giving any delight, and are simply terrible; but at certain distances, and with certain modifications, they may be, and they are delightful, as we every day experience” – Burke, Idem. 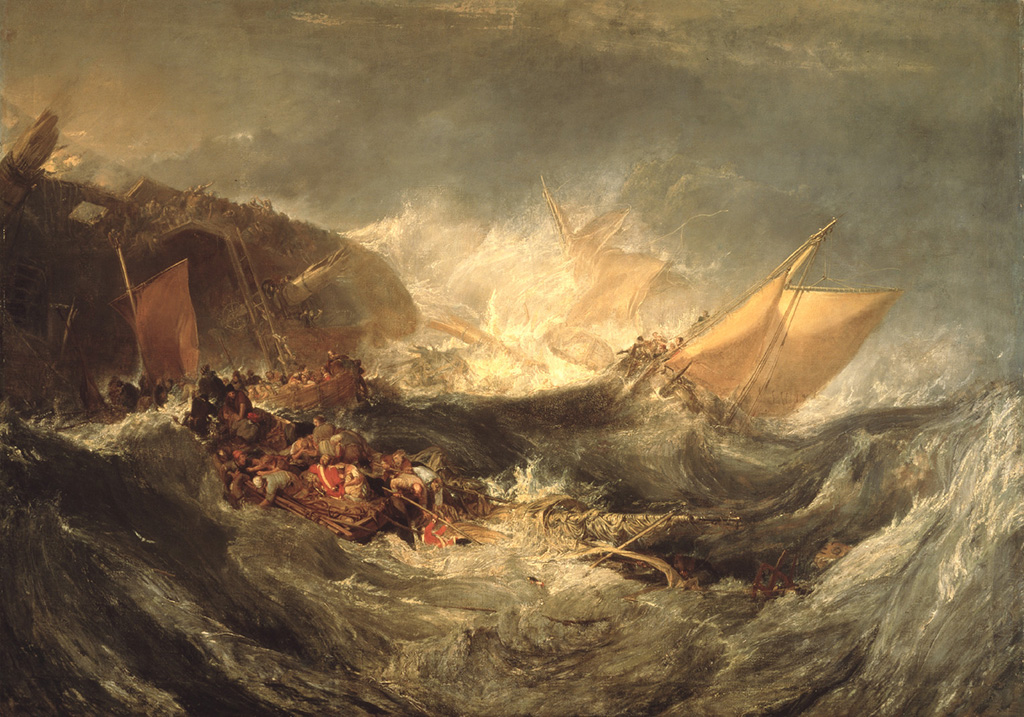 ‘The Wreck of a Transport Ship’ by William Turner

For Burke the triggers of the sublime were darkness, obscurity, privation or vastness – qualities he associated more with terror than elation (Smith, Idem).

He considered sublime and beauty to be mutually exclusive, despite the fact that both can produce pleasure:

“Beauty may be accentuated by light, but either intense light or darkness (the absence of light) is sublime to the degree that it can obliterate the sight of an object. The imagination is moved to awe and instilled with a degree of horror by what is “dark, uncertain, and confused.” Burke, Idem.

In continental philosophy, Immanuel Kant’s understanding of the sublime dominated. Although he was influenced by Burke, he regarded the concept less in empirical terms and more as a mental condition or an aesthetic experience that resulted from a strain in perceiving a boundless or infinite vista (Smith, Idem).

In Kant’s view, there are three kinds of sublime: the noble, the splendid and the terrifying (Wikipedia, Sublime philosophy). Schopenhauer went even further by dividing sublime in five categories based on intensity:

“Weakest Feeling of Sublime: Light reflected off stones. (Pleasure from beholding objects that pose no threat, yet themselves are devoid of life).

Weaker Feeling of Sublime – Endless desert with no movement. (Pleasure from seeing objects that could not sustain the life of the observer).

Fullest Feeling of Sublime – Immensity of Universe’s extent or duration. (Pleasure from knowledge of observer’s nothingness and oneness with Nature)” – Arthur Schopenhauer, “The World as Will and Representation”, p39. 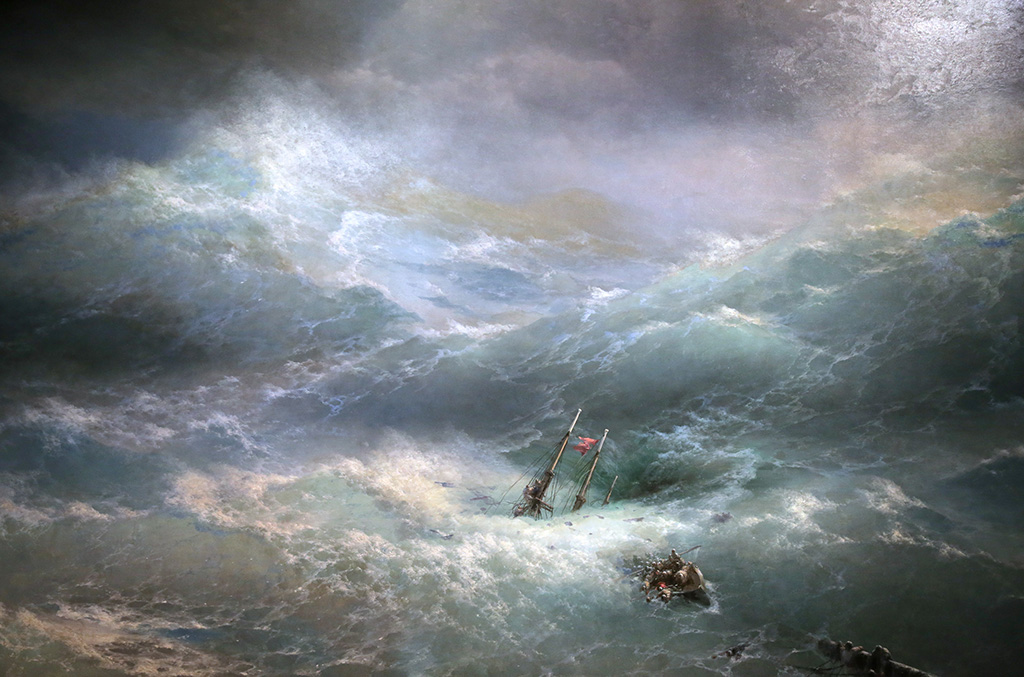 ‘The Wave’ by Ivan Aivazovsky

Rudolf Otto popularised the term ‘numinous’, deriving from the Latin ‘numen’ which means ‘arousing spiritual or religious emotion; mysterious or awe-inspiring’ – Collins English Dictionary -7th ed. – 2005. The numinous, which roughly corresponds with the continental definition of the sublime, was further divided by Otto into two components: the splendid and the terrifying, or mysterum tremendum (causing you to tremble) and mysterum fascinans (exhibiting fascination) – Rudolf Otto, ‘Mysterium tremendum et fascinans’.

Many painters of the early Romantic movement tried to evoke the sublime quality of nature by focusing on its terrifying qualities. Towards the second half of the 19th century critics started to doubt that painting is an appropriate medium for evoking the turbulent nature of terrifying sublime. The art of the later half of the 19th century focused mainly on evoking clearly articulated forms of beautiful landscapes that were supposed to elicit disinterested rather than disturbed emotions in the viewer. The Burkean sublime continued to have an impact in poetry as well as in the field of popular culture, theatrical entertainment and illustration more than in the fine arts (Idem).

John Ruskin rejected the sublime as a discrete category, although he showed great interest in Burke’s ideas:

“Anything which elevates the mind is sublime, and elevation of mind is produced by the contemplation of greatness of any kind … Sublimity is, therefore, only another word for the effect of greatness upon the feelings – greatness, whether of matter, space, power, virtue, or beauty: and there is perhaps no desirable quality of a work of art, which, in its perfection, is not, in some way or degree, sublime” – Smith, Idem.

Over the course of the same century the term started to be used not only to describe nature, but also artificial structures and landscape. In Hegel’s view, the excessive detail in Chinese art or the overwhelming decorations in Islamic mosques should be considered sublime. “The disembodiment and formlesness of these art forms inspired the viewer with an overwhelming sense of awe” (Wiki, Idem). Walter Benjamin experienced feelings of sublime while contemplating historical cities (Christine Boyer, “The City of Collective Memory”), while others like Ruskin, Piranesi or Speer experienced the sublime when contemplating ancient ruins.

Although I haven’t specifically encountered the term ‘historical sublime’, it seems necessary as a discrete category to the extent that the complexity and richness of a perceived historical heritage and its relation to the passage of time can evoke emotions of fascination of terror. The nostalgia of a past era, the otherness of its relics or the mere acknowledgement of their great age and the irreversibility of time might overwhelm the beholder and evoke his own insignificance. The relic’s scale might vary from an old deserted house to a cathedral or an entire historical city. 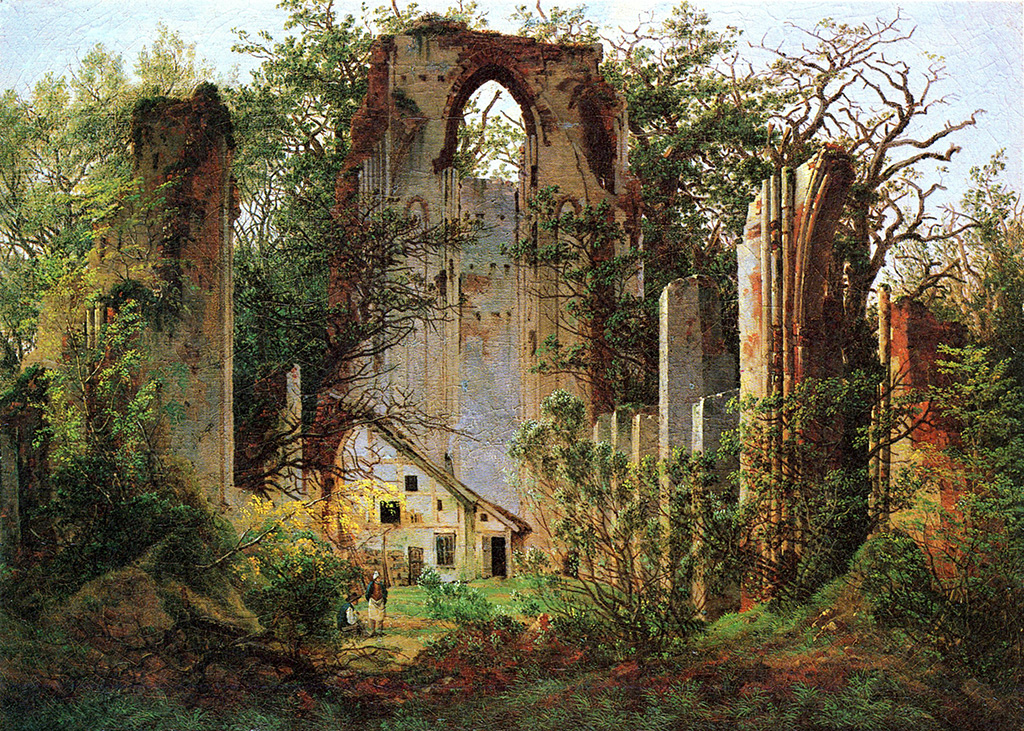 In Mario Costa’s view, in the 21st century the concept of ‘sublime’ has become linked to digital technologies and the new technological productions: “new media art, computer-based generative art, networking, telecommunication art” (Wiki, Idem). These might be seen, of course, as tools of progress, contributing to a glorious future or, on the contrary, as useful tools for investigating the past in creative ways and bringing it to life. You get a much stronger feeling of sublime when contemplating a digitally restored ancient environment than when seeing a relic in a museum.

Modern art, in its rejection of aesthetic categories, gave up on the pursuit of either beauty or the sublime and therefore became unintelligible and irrelevant to the interests of the masses. Although postmodernism embraced both nostalgia for past ages and the interest in pop culture, its ironic quotations and its irreverent deconstructive approach was still inaccessible to the public and regarded as elitist snobbery.

Popular culture genres such as novels, cinematography and video games seemed much more interested in exploring historical sublime. The American dinosaur mania of the 20th century induced a fascination with prehistory which became tangible through films like ‘Jurassic Park’. Historical films or video games brought the past back to life in colours undreamed by the Romantics of past ages. While playing a game from the ‘Total War’ series one can literally feel the mix of fear and patriotism of the soldiers fighting off an invading horde. The more immersive the production, the fuller the sublime (on Schopenhauer’s scale).

In the context of new media, virtual simulation of the past transcended its mere imitation; it also created a new approach on history – ‘reflective nostalgia’ (Boym, Idem). 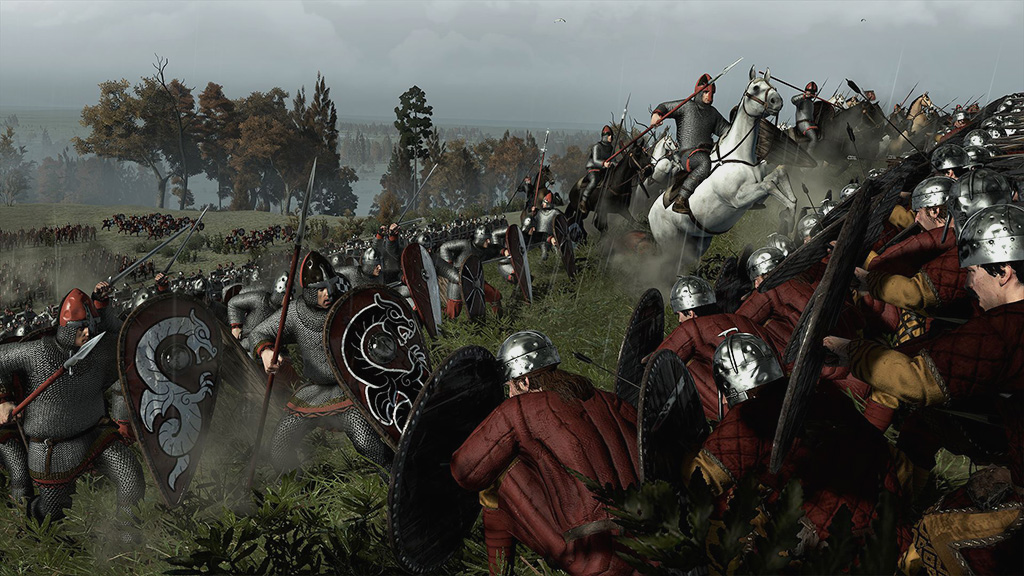 In this approach, the goal of the designer is not necessarily historical accuracy, but the production of an immersive world that would evoke a different ‘space-time’, a deja vu from history. The ‘alternate history’ approach produced genres such as Steampunk, Cyberpunk, Arcanepunk, Gothicpunk, Post-apocalyptic dystopia. Most of these genres deliberately mix the culture of a past age with the present culture; some speculate on futuristic developments of our world, some are based on ancient myths, while others imagine completely parallel worlds. The goal is to create an environment characterized by sublime and oherness – an alternative to the predictable world of the present. These environments are so vast and immersive, their architecture and characters are designed to such a degree of detail, that the beholder is confronted with greatness beyond comprehension. It feels like nothing they have ever seen. Vastness, complexity and lack of familiarity become the main ingredients in the products of historical sublime.