The main goal of the Architectural Visualiser is to represent a particular landscape in a creative way. But why would anyone think that visualisation is about landscape? Many see it as being related to a particular 3D object – the building or public space that needs to be advertised, treated like a jewel, an abstract object that needs to be shown in all its beauty and shininess. The problem with this approach is that it involves very little creativity. A 3D object is already known. It was designed by the architect, who decided its particular shape and materiality, so what can you do about it other than use some light sources to get a nice contrast? Not much. On the other hand, relating to ArchViz in terms of ‘landscape’ opens up many more possibilities. Landscape is distant and unknown; you are required to explore it in order to represent it. This is the first task of the Architectural Visualiser, and it’s not at all obvious how this can be accomplished. I believe a phenomenological approach can offer many insights into this topic, and for this I will focus mainly on an article by Jordan B. Peterson in the Canadian Journal of Psychiatry.

“Where do new ideas come from? Who generates them, and how? Human beings are constrained and low-capacity processors. Our perceptions are necessarily low-resolution representations of an almost infinitely high-resolution reality. Likewise, our concepts are mere shadows of our perceptions. The informational array that constantly presents itself to us can be simplified, for pragmatic purposes, just as a low-resolution photograph can stand as a substitute for a high-resolution photograph. Thus the same thing-in-itself can be perceived in many different ways, none of which are necessarily more or less accurate than any other. This means that the real object always contains additional information, available to the imaginative diligent searcher.” – J. B. Peterson, ‘Creative Exploration and its Illnesses’. 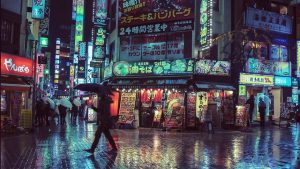 2. ABANDONING YOUR TERRITORY IN ORDER TO EXPLORE THE UNKNOWN. ORDER VS. CHAOS

Just like social animals, humans inhabit a specific territory. It not only encompasses a geographical area in which you live physically, but also a familiar mental space which includes the persons and objects you encounter regularly, your memories, habits and – most importantly – a hierarchy of values which structures all these mental elements so that you know what to do at any given time.
It is important to understand territory in this way (mental space-time), and not reduce it to a material geographical space. As I mentioned in the previous article, what we perceive as ‘fixed’ and ‘material’ is actually fluid and ever-changing. A catastrophe can suddenly transform your neighbourhood, your house or even your body, so that you’re no longer in known territory. Time, weather, lighting conditions, persons and objects, mental states – they change all the time, allowing us to glimpse new aspects of the infinite high-resolution reality of the surrounding landscape. In most cases, however, we tend to ignore them.

“Under normal conditions, the thing-in-itself is hidden from us by our habitual patterns of perception and conception. We see more of our memory than we do of reality when we look at the world, even at very early stages of sensory processing. Our perceptions are gated, at the thalamic level, by our goals and presuppositions. […] Creative people appear to have lower levels of latent inhibitions. This may mean that they perceive more of the complex thing-in-itself and less of their own preconceptions than people who are less creative. Latent inhibitions can be reduced by dopaminergic agonists – or perhaps, by stress, which is also associated with dopaminergic release and hypothalamic-pituitary-adrenal axis activation” – Idem.

In order to explore the landscape, you need to move away from your territory. Silence your routines and habits, so that you can get a glimpse of the thing-in-itself. In most cases, this is not a conscious choice, but rather an unexpected encounter. In Peterson’s definition, an ‘anomaly’ is a phenomenon that shines forth from the outside world, halting your linear routines and though processes and demanding immediate attention. It can be anything from a sudden pain to a mysterious noise or a threatening predator. It manifests like a burst of contradictory meanings, demanding immediate attention and action. 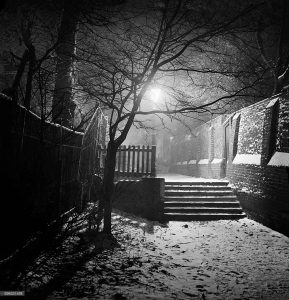 3. SUBLIME – THE PHENOMENON THAT SHINES FORTH WHEN YOU EXPLORE THE LANDSCAPE.

You need to represent a particular landscape; natural or artificial – it doesn’t matter. You want to be creative so instead of just requesting photos of the site from the client, you go there to experience the place first hand and take the photos yourself. Chances are the place is so similar to others that you won’t even pay attention to the landscape or have a minimal perception of it because you have some memories to worry about.

In some rare cases, however, the situation might be different. The atmosphere of the place can be so peculiar that it draws your complete attention. This could be due to a scenographic effect – the magnitude of a building, a panorama, an unexpected ascending/descending view of a street, a well balanced row of houses or a picturesque medieval square. It could be an atmospheric effect – a very gloomy day, a torrential rain, a contrast between apocalyptic clouds on your left and a low sunset on your right; a mysterious mist hiding the details of the trees and buildings, showing only their silhouettes. Could be the angry sounds of a stormy sea at night when you’re on a pier surrounded by complete blackness, or the sounds of birds and trees in a tall mountain forest. The sublime character of the landscape shines forth capturing your full attention, materialising as a strong feeling of awe and you suddenly realise you’ve been confronted with greatness beyond comprehension.

As the philosopher Edmund Burke pointed out, the sublime should not be confused with beauty. He realised that “beauty may be accentuated by light, but either intense light or darkness (the absence of light) is sublime to the degree that it can obliterate the sight of an object. The imagination is moved to awe and instilled with a degree of horror by what is “dark, uncertain, and confused.”” – ‘Sublime (Philosophy)‘. In the context of this article we can understand why that is – beauty is an aesthetic category that is rooted in order and territoriality, whereas sublime is rooted in chaos and exploration of the unknown. It is an anomalous phenomenon.

Those who wish to break the ‘sublime’ emotion into further categories may say it has two components: the splendid and the terrifying, or mysterum tremendum (causing you to tremble) and mysterum fascinans (fascinating). However, we should keep in mind the fact that the phenomenon is very unified and these subcategories are matters of nuance rather than polarisation. Schopenhauer created a scale of the sublime experiences which perfectly illustrates this gradual transition from fascination to fear or viceversa: 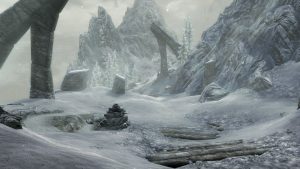 The unexpected encounter with the anomaly triggers a chain of physiological processes which, I think, explain the range of emotions we feel when the sublime phenomenon shines forth. So you left your mental territory behind and met the unknown. Although this distinction between order and chaos might seem metaphorical, your brain realises very well when this transition has occurred and starts to act accordingly.

“When that happens, your brain stops thinking about the future and puts you in emergency preparation mode so you’re ready to do anything at the drop of a hat because you don’t know what to do. You sweat and you can’t sleep, because the orderly structure you thought you inhabited that provided you with security and direction has now disappeared.” (J. B. Peterson, Maps and Meaning, Hierarchies and Chaos).

“This confrontation can be frightening […]. The emergence of the unexpected is rapidly equated with danger by specialized brain systems, including the hippocampus, amygdala, anterior cingulate cortex, and the reticular activating system. […] The limbic and cortical novelty-detection systems therefore bring ongoing goal-directed behaviour to a halt when the unexpected emerges, disinhibiting the production of negative emotion: anxiety, shame, guilt, and emotional pain.

If nothing additionally unexpected or negative occurs in the aftermath of the first failure, then protective negative emotion begins to recede, and the dopaminergic psychomotor exploratory systems, with their origin in the hypothalamus, begin to govern perception and behaviour. The emergence of the unexpected is dangerous, but promising. Pragmatic failure means that there was more to the thing-in-itself than originally suspected. The unmapped portion of that thing may pose a threat, but may also offer possibility for the expansion of competence. Exploration generates the information from which new possibilities are born. Increased dopaminergic activity is also associated with increased positive emotion, energy, associational fluency, and exploration. All of these phenomena can be transformed into creative production” – J. B. Peterson, ‘Creative Exploration and its Illnesses’.

What starts as a terrifying experience, if it doesn’t prove fatal to the beholder soon becomes worthy of fascination and triggers positive emotions. This is the horror genre in a nutshell.
Peterson also emphasises another reason why the sublime phenomenon generates such strong reactions – the hypothalamic-dopaminergic system which governs perception in these situations is very archaic in evolutionary terms, predating the neural systems that govern anxiety, probably being as old as the systems that govern pain (Idem). This might explain the strong feeling of oneness with the landscape the beholder experiences in such states. Not only the sublime phenomenon is great beyond comprehension, but also the brain structure that responds to its stimulus. It is much older, much deeper than our rational, orderly side. 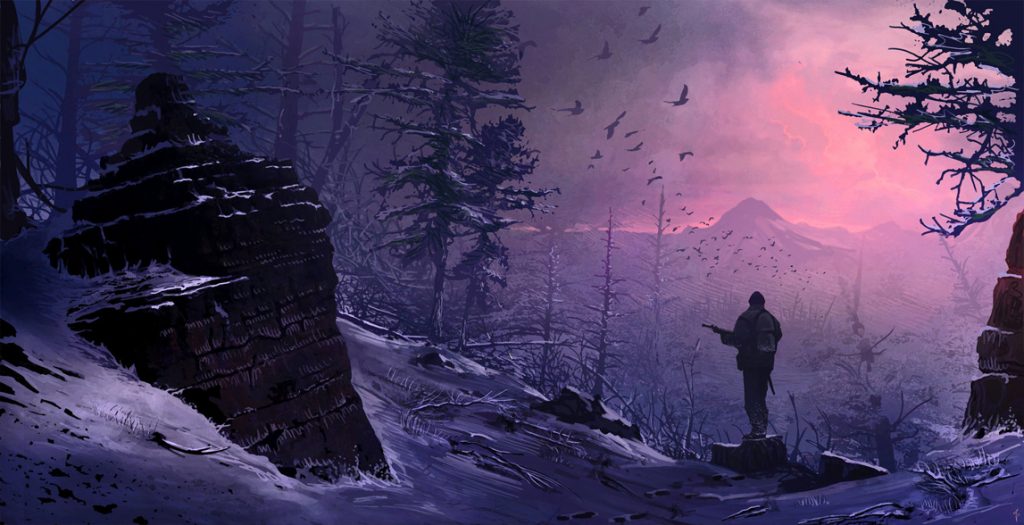 ‘Widerness – Movement in the Forest’ by FreeMind93. Image source: DeviantArt

5. THE BORDER BETWEEN CHAOS AND ORDER

Fortunately, you don’t have to encounter traumatic anomalies every time you want to be creative. You can rather position yourself in a place called ‘the edge of chaos’, at the border your territory gazing into the unknown landscape. Although this place might seem just as metaphorical as the earlier described places of ‘order’ and ‘chaos’, Peterson argues that your nervous system tells you exactly when you have arrived here:

“The optimally meaningful life is to be found on the border between chaos and order. You can tell when you are there because you’re secure enough to be confident, but not so secure that you’re bored, and you’re interested enough to be awake but not so interested that you’re terrified. And when you’re in a state like that, when you find things interesting and meaningful, time slips by you and you’re no longer self conscious. It’s not only real, it’s the most real thing. It’s where potential is transformed into reality” – .” J. B. Peterson, ‘Maps and Meaning, Hierarchies and Chaos’.

In pure phenomenological tradition, Peterson sees chaos as an infinite source of potential – something you dive into temporarily so that you might discover new meanings and possibilities to bring back into your territory and materialise into reality. If this might sound esoteric, when considered from an artistic perspective it’s just the thing you’re looking for when you’re aiming to be creative. The goal is to escape the everyday routines and mental shortcuts and look at the landscape from a new perspective – capture the ‘genius loci’, experience it to the full, learn something you didn’t know about it and then try to represent that fresh perspective as a digital art piece. In the end, the image that you produce as a result of this process will remain linked in your memory to the sublime experience you had while contemplated the landscape. 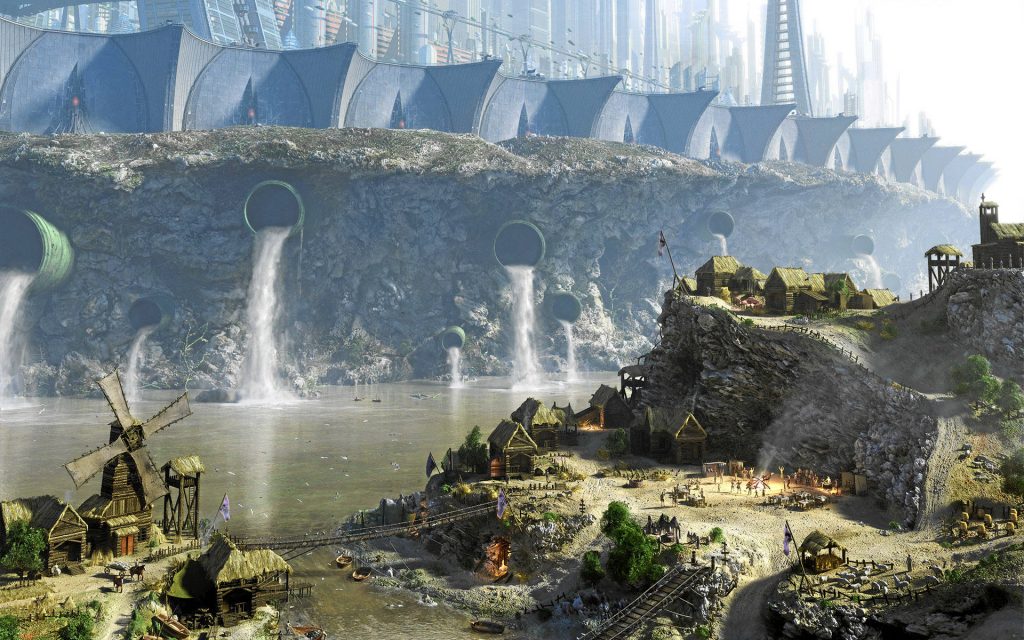